What is the Montessori Method? 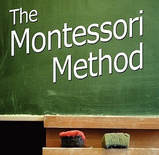 Montessori is a method of education based on self-directed activity, hands-on learning and collaborative play. In Montessori classrooms children make creative choices in their learning, while the classroom and the teacher offer age-appropriate activities to guide the process. Children work in groups, or individually, to discover and explore knowledge of the world and to develop their greatest potential. ​

Maria Montessori developed her approach to education over a 40-year period of constant observation and experimentation. The Montessori approach focuses on the development of human potential. The fundamental approach is of "following the child," in recognizing the developmental needs and characteristics of children of each age group and constructing the corresponding environment that best meets their needs.

Maria Montessori observed that a child moves toward adulthood through a series of developmental periods she called the Planes of Development. Each period is different but builds on the foundation of the preceding period with the Montessori environment and approach tailored to meet the child's needs at each stage.

There are four planes of development. In the first plane, from birth to age 6, the child learns through his or her "absorbent mind," absorbing all aspects of his or her environment, language and culture. In the second plane, from ages 6 to 12, the child uses a "reasoning mind' to explore the world with abstract thought and imagination. In the third plane, from ages 12 to 18, the adolescent has a "humanistic mind," eager to understand humanity and the contribution he or she can make to society. In the fourth plane of development, from ages 18 to 24, the adult explores the world with a "specialist mind," taking his or her place in the world. Maria Montessori believed that if education followed the natural development of the child, society would move to a higher level of co-operation, peace and harmony.

Who is Maria Montessori?

Maria Tecla Artemisia Montessori (August 31, 1870 – May 6, 1952) was an Italian physician and educator best known for the philosophy of education that bears her name, and her writing on scientific pedagogy. She was a single mother. Her educational method is in use today in some public and private schools throughout the world.

​​Maria Montessori is often referred to as "before her time". Born in Italy in 1870, Maria Montessori moved to Rome with her parents in 1875 at the age of five. Although her father embraced traditional views of female education, it was the more liberal approach of her mother that encouraged Maria Montessori to explore her natural inclination to learn, regardless of the social restrictions placed on women in the male-dominated society of the day. In so doing, her mother played an active role in her daughter's upbringing, and indeed, the whole philosophy behind what is now known as the "Montessori Method."